An Eventful Weekend In Wales With The Local Wildlife
This couple’s weekend in Wales went from piggy walking to birds of prey real quick…
Good Day Out was chosen to feature in the video because of our benevolent remit and eco credentials.

The Ultimate Wellness Therapies and Retreats in Wales

Ever feel like you need to slow down? With the non-stop intrusion of modern life, it’s hardly surprising mindfulness has become so popular of late. If you need to stop a moment, breathe a little and reconnect with the world around you, we can help!

Whether it’s meditating beside a peaceful lake in Snowdonia, practising yoga on the snow-capped Brecon Beacons, or experiencing the tranquillity of stand up paddleboarding under the stars, Wales’ diverse and striking landscape is the ideal place to recharge and rebalance your inner world.

Give Back on a Microgap

Do something positive and create unforgettable memories at the same time. Combine travelling the UK with weekend volunteering, charity trips and sustainable experiences to improve the world around you. Give Back on a Microgap.

Embark on a mini adventure along a beautiful valley in the Brecon Beacons with a couple of Kune Kune pigs.

The spring sees Britain burst awake from its winter slumber, welcoming new animal arrivals and the return of thousands of migratory birds. If you want to be surrounded by the sounds of birdsong and lambs bleating, get hands-on with farm animals or spy some of the world’s rarest species, here’s where to experience the magic of Britain’s animal world.

Sadie Nicholas writes about women and their miniature donkeys

Meet the dinky donkeys! At barely 3ft high, these are the petite pets who can turn any family home into a real-life Nativity scene.

Say the words ‘little donkey’ and you can’t help but think of the adored Nativity carol. But if you’ve ever wanted your very own little donkey, now is the time.

Spurred on by the likes of Hollywood star Reese Witherspoon, who has two, a growing number of women are adopting Miniature Mediterranean donkeys, which originate from Sardinia and Sicily.

18 fantastic Christmas gift ideas for your family and friends

Every Christmas comes the question of what to get your nearest and dearest. You don’t want to get something similar to what you’ve given before, and you also want something they’ll really like and use. In short, gift buying and giving can be a stressful process!

So, if you’re struggling on what to get your family and friends this Christmas, we’ve got you covered. Take a look here for a list of original and fantastic gift ideas, available at places across Wales, guaranteed to bring a smile to their faces this festive season.

Wales is a wonderful location to experience (these kinds of) countryside activities, being a popular spot for nature walks, farm visits, and more. People of all ages and from all walks of life can enjoy these activities, and an inspirational company named Good Day Out is making the whole thing even better by offering a long list of unique day out opportunities, all for a good cause.

Best Family Days Out this Easter

Make the most of the Easter holidays with a fun day out for the kids. There are duck races, duck trails and duck eggs to find, the Easter Bunny to meet and lots of chocolate Easter egg hunts, going on all around the country. So get out there now and make the most of it.

Enjoy feeding the lambs in the heart of this breathtaking National Park.

Good Day Out offers the chance to befriend some animals and support Welsh charities whilst enjoying fresh air and beautiful views of the Brecon Beacons. Poppy Manning finds out more…

Lynne Allbutt joined one of our Hedgelaying days

My love of dry stone walling is legendary now, so when I had the chance to learn to lay a hedge properly as well, I obviously leapt at it.  Last Saturday I spent the day with a lovely group of people, two fabulous tutors, an unruly hedge and an impressive array of sharp tools!

Year of the Pig

The Royal Mint published the promotional material for their special Chinese New Year, 2019 Year of the Pig commemorative coins, an animal said to represent happiness and wealth. Our very own Good Day Out piggies were used as models for the leaflet that was mailed out to potential collectors.

Hidden away up a dirt track, you’d think the most surprising thing about Dinky Donkey was actually finding it. But no. An hour walking and picnicking with these adorable miniature furry fellas is proving more popular with grown up tourists than it is with the kids. Who knew?

8 Things to do in the Brecon Beacons

April 2018 – The UK is home to 15 National Parks, one of which is the Brecon Beacons, a stunning South Wales mountain range, home to rolling moorlands, ancient castles and thundering waterfalls. If you’re planning a trip, here’s how to make the most of your visit.

Now, bear with us. While taking a walk with pigs might not sound like the most obvious way to spend an hour or two in the Welsh countryside, it’s actually a wonderfully unique and engaging activity for couples and family groups alike.

From birdwatching in Sussex to cycling in Norfolk, Tom Chesshyre picks the 20 best breaks — and where to stay

This is where you can feed new-born lambs across Wales

No 1 – Good Day Out   Animal lovers have the chance to experience of a ‘no holds barred’ day in the life of an organic sheep farmer at lambing time. As part of the activities day, people can feed the lambs

The Great Outdoors: Ruth Wignall and Andrew Price explore Wales and meet some of the country’s most interesting characters. Andrew tries his hand at horseback archery and meets a group of fishermen using traditional lave nets on the River Severn. Ruth goes sheep trekking in the Brecon Beacons and enjoys a horse ride on Marros Sands beach in Carmarthenshire.

If someone told you they were taking pigs for a walk in the Brecon Beacons, you might think they were telling porkies. But Good Day Out, in Heol Senni, Powys, gives people the chance to go for a stroll with Kunekune pigs Babz, Holly, Hazel and Willow.

Helena Barnard, who runs the walks with Julia Blazer, began after she adopted two pigs and walked them with family. “It’s really about getting people closer to nature,” she said.

Sheep farming has played a significant role in the history of the Brecon Beacons. Today the  National Park remains criss-crossed with drover’s roads from times gone by, when cattle and sheep were taken to market from the high mountain pastures. Helen Skelton meets local hill farmers, Paul and Liz Matthews, who have diversified from traditional sheep farming, and offer a very different experience in the hills and on the paths of the mountain pastures.

With VLoggers Craig & Aimee of Kinging-It.

The school holidays are almost here and many families will already be wondering what to do over the six weeks. Well, if you’re after something new then X-Ray could have the answer. We teamed up with internet vloggers Craig and Aimee to try out two unusual activities that you can do in the great Welsh outdoors. More used to adrenaline sports in exotic parts of the world, this pair from Barry can’t resist a challenge. But as our video shows, it wasn’t them who ended up hogging the camera.

Hearst Magazines China – hosted a fun trip around the National Park with Adam Huang to film the 1st dedicated online video feature for Wales. Nov 2015.  Hearst Magazines owns Elle Deco, Living Etc and many of the world’s leading lifestyle magazines. Called in our best entertainers – Jonathan Davies to talk about the local history & Allan Trow to talk about the stars.

Julia had a broken ankle, so was hugely grateful to her sister Kate who made it all happen & waited for Julia to catch up! 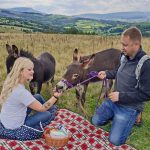 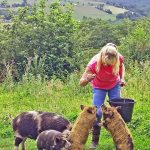 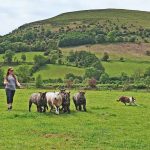